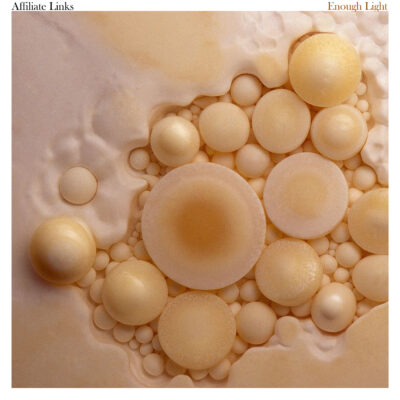 Enough Light the debut solo release from songwriter Bradley Davis’s debut as Affiliate Links is out now (September 9, 2022). After more than a decade immersed in instrumental post-rock as a member of Fresh Snow, Enough Light is as bold an about-face as anyone familiar with Davis’ previous band could expect.

“I felt compelled to make music filled with words and free from the red tape that can go along with a band,” he says of Affiliate Links’ origin and impetus. As for opting for a band name versus using his own, Davis says: “I thought that it would be more interesting for me to present Affiliate Links as a band,” given that he shares a name with the late actor Brad Davis (of Midnight Express and Chariots of Fire).

Davis recorded most of Enough Light at home — it was later mixed by Graham Walsh (Holy Fuck, Alvvays) — in the summer of 2021 while away from work as a teaching assistant. “I have never been good at relaxing,” he admits, so when collaborating with others wasn’t an option, he made working on Enough Light part of his routine, setting himself tasks and deadlines, which kept the creativity flowing. “I had already recorded ‘Walk on Water’ and ‘The Dedicated Organ’ (both mixed by Ben Etter, whose credits include Cate Le Bon, Deerhunter, and Franz Ferdinand), and I used those as jumping-off points for the rest of the album.” Davis began exploring language and lyrical expressiveness from these initial sparks, looking for “poetry in everyday language” and ways to repurpose jargon and conversations to examine relationships from different perspectives. On the former, Davis compares a decaying relationship to the end of the tourist season in a seaside town; the latter features the arresting line “Attention all shoppers, the store will be closing” as a signal that time’s running out and decisions need to be made.

“Playing with words is one of my favourite parts of songwriting,” Davis shares. “I keep lists of words, sayings, and combinations on my phone,” many of which become the basis for his observational vignettes. You can only imagine where lines like “Previous engagements / edible arrangements / your false sense of security’s been breached / a peculiar calm and clear / the doomsday scrolls are here / we made every effort for consensus to be reached” (from pedal steel-powered “Conditions Apply”) originate. Buoyantly melodic “Recovery Position” is more direct but no less poetic: “Half-alive and far too real / ten dollars in advance / fifteen at the door / old tickets will be honoured / honour must be restored,” hints at how, like many of us, Davis has been missing live music and connecting with others.

As much as the lyrics on Enough Light explore intimacy in non-romantic relationships and losing one’s sense of joy and purpose, its frenetic, layered, and detailed music speaks to Davis’ relationship with the music of his formative years. “I’d say that the 90s are so firmly planted in my DNA that I can’t leave them behind,” he acknowledges. Whether it’s the crunchy guitars and laid-back immediacy of “Blank Banners,” the effervescent and alluring “Baby’s Changing Stations,” or the elegant melodicism and incandescent harmonies of “Vestigial Stubs,” Enough Light’s eleven songs unfurl over forty minutes like Davis’s genetic sequencing set to sound.

Anchoring the melody-drenched reverb and hook-ladened atmosphere of Enough Light are its bookends. Opener “A Message from Mary” and the finale “A Message to Anthony” are hypnotic mini-symphonies (featuring cello arrangements by Yoed Nir) whose tone contrasts with the rest of Enough Light while gelling the album as a whole. Graceful, wistful, and perfectly paced, their “messages” interchangeably serve as an arrival and departure, a hello and goodbye; the dream-time when you know the night is over and all your friends abandoned you hours ago. That’s when expectation wraps its arm around your shoulders, imploring you to fend off sleep for a bit longer, for even while the magic of last night evaporates with the rising sun, the world is still buzzing with possibility.